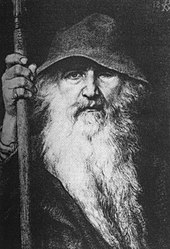 Prior to Christianization, the Germanic peoples (including the English) celebrated a midwinter event called Yule (Old English geola or giuli).[20] With the Christianization of Germanic Europe, numerous traditions were absorbed from Yuletide celebrations into modern Christmas.[21] During this period, supernatural and ghostly occurrences were said to increase in frequency, such as the Wild Hunt, a ghostly procession through the sky.[citation needed] The leader of the wild hunt is frequently attested as the god Wodan (Norse Odin), bearing (among many names) the names Jólnir, meaning "Yule figure", and Langbarðr, meaning "long-beard", in Old Norse.[22]

Wodan's role during the Yuletide period has been theorized as having influenced concepts of St. Nicholas in a variety of facets, including his long white beard and his gray horse for nightly rides (compare Odin's horse Sleipnir) or his reindeer in North American tradition.[23] Folklorist Margaret Baker maintains that "the appearance of Santa Claus or Father Christmas, whose day is 25th of December, owes much to Odin, the old blue-hooded, cloaked, white-bearded Giftbringer of the north, who rode the midwinter sky on his eight-footed steed Sleipnir, visiting his people with gifts. […] Odin, transformed into Father Christmas, then Santa Claus, prospered with St Nicholas and the Christchild, became a leading player on the Christmas stage."[24]
Posted by KAY